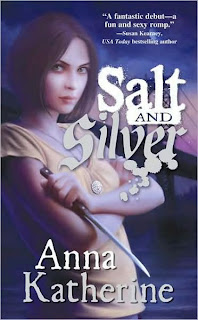 From Amazon.comThis lively tale of demons and gods, the debut effort of Katherine Macdonald and former Tor editor Anna Genoese, opens six years after witty, sarcastic Allie, a trust fund baby turned Brooklyn diner manager, inadvertently generates a door to hell in the diner's basement with the help of her childhood friend Stan. Leather-clad demon fighter Ryan shows up in response and soon becomes Allie's love interest. Now new doors are beginning to appear, leaving the human world vulnerable to invaders from the underworld. As Allie, Stan and Ryan join forces with a witch and rival clans of demon hunters in hopes of restoring balance between supernatural beings and human "mundanes," Genoese and Macdonald mix multiple mythologies into a charming, biting cautionary narrative about taking responsibility for one's actions.

Allie is the sarcastic, sweetheart proprietor of Sally's diner, and the owner of the doorway to Hell in it's basement. Ryan is the quiet, hot, bad ass demon hunter who shows up instantly to protect both Allie and the world from the demons who emanate from said door way to Hell. You could cut the sexual tension between them with a knife, and rightly so. It has been brewing for six years. That's a lot of smoldering looks and lonely nights, especially after putting your life on the line almost every night fighting demons.

One day everything changes because Allie's Door disappears, throwing the delicate balance of Hell Doors off. Thus begins the quest of Allie and Ryan: to find an answer to the funky Hell Door problem. Other hunters assist with their quest which requires a journey to Hell through on of the Doors. This is where the story really takes off, because we learn a lot more about Allie and Ryan and their respective pasts. Not only must they battle actual demons and roadblocks, they must battle their inner demons as well. Both Allie and Ryan mature along their journey; Allie realizing she is taking responsibility for her past actions and Ryan letting people get close to him. They learn about themselves and each other.

Now back to the story. The paranormal demon parts do not flow very well, in that I was a bit confused from time to time, as if I missed a part somewhere. This could be due to the fact that Allie is the narrator, and as such, does not have full knowledge of the demon history and rules. Ryan likes to protect Allie from the bad stuff (aww). The choppiness of the paranormal tid bits may also be due to the author collaboration as well. Either way, just let that go and read the story. You will not be disappointed. The big battle scene at the end is like something out of Buffy the Vampire Slayer, carnage and destruction everywhere, with one cool chick in the middle of it all.

Here is a taste of the writing:

Here are some important facts about the Door. One: It was Amanda's idea to open it, not mine. Two: It was a joke. We didn't even realize we were opening a Door into Hell, because we were super-drunk at the time, and, seriously, joking around. Now that I know what Doors do and how they work...well, I never wanted something so bad that I'd open a Door for it. Because three: The reason anyone would want to open a Door to Hell in the first place-with the death, and the blood, and the bioluminescent goo that you can't actually ever clean off the floor no matter how harsh the chemicals or how many black cats you drive across the stain (and that's a fun story) - the reason you do it is because the Door...gives you things.
pg. 5

Ryan pushes the cookie toward me anyway, even though I shunned his cookie! I shunned it. But it's the vanilla half of a black and white cookie. It is inevitable that I am drawn to it. I reluctantly take a bite.
pg. 114

Allie and Ryan are two halves of a black and white cookie. They need each other and complement each other perfectly. They are a sweet, kick ass couple.
Salt and Silver was a very entertaining read and I would certainly pick up another of "Katherine's" books.

Sounds good, and love that you went aww over his protective streak

I usually stay away from doors to hell and demon hunters, but your review has intrigued me :)

I like the cover of this one. Your review makes it sound very intriguing!

Your review was fun to read and has me wanting to visit Hell!!

Stacybuckeye: I think you would find this funny. If you have ever seen an episode of Buffy, then you could read this book.

B, Staci, Jenn: Thanks. I like the cover too. And it was fun.