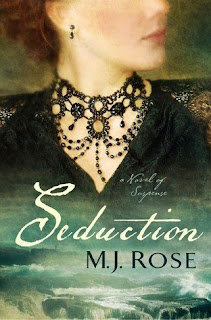 Publication Date:  May 7, 2013Atria BooksHardcover, 384 pISBN-10: 1451621507SYNOPSIS from HFVBT: From the author of The Book of Lost Fragrances comes a haunting novel about a grieving woman who discovers the lost journal of novelist Victor Hugo, awakening a mystery that spans centuries.In 1843, novelist Victor Hugo’s beloved nineteen-year-old daughter drowned. Ten years later, Hugo began participating in hundreds of séances to reestablish contact with her. In the process, he claimed to have communed with the likes of Plato, Galileo, Shakespeare, Dante, Jesus—and even the Devil himself. Hugo’s transcriptions of these conversations have all been published. Or so it was believed.Recovering from her own losses, mythologist Jac L’Etoile arrives on the Isle of Jersey—where Hugo conducted the séances—hoping to uncover a secret about the island’s Celtic roots. But the man who’s invited her there, a troubled soul named Theo Gaspard, has hopes she’ll help him discover something quite different—Hugo’s lost conversations with someone called the Shadow of the Sepulcher.What follows is an intricately plotted and atmospheric tale of suspense with a spellbinding ghost story at its heart, by one of America’s most gifted and imaginative novelists.

Seduction is....love, desire, ancient power, fear, loss, friendship, secrets and past lives remembered.  This story has all of these elements and people can be seduced by each and every one.  Seduction is the fifth book in Rose's reincarnation series but it truly is a stand aloe novel.  Aspects of the the previous book, The Book of Lost Fragrances, are mentioned but do not confuse the reader.  If anything  they make me want to go back and read that book, which I will definitely do.  So since this is a book that features past lives it is only fitting that the story have three threads for the reader to become engrossed in.  And trust me, each thread has allure.

The first thread features our heroine, Jac L'Etoile.  She has episodes of dizziness and other-worldliness that are triggered by scent.  These episodes feel disturbingly real, as if she has actually been there wearing the ring or speaking with the people she encounters.  The lure of discovering new Celtic ruins and an old friendship formed during a difficult part of her life, brings Jac to Jersey Island. While there Jac ultimately discovers what her episodes are and how everything ties back to her life.

The remaining two story threads revolve around the Isle Jersey.  It is here that Victor Hugo enters the story, and by exploring his connections to the island, that Jac ultimately experiences and brings the reader into the third story line, a Celtic family in crisis that happened I think in the Dark Ages (basically a very, very, very long time ago).  With Hugo, Rose created a fascinating character.   I don't know much about him, but I researched that and was able to imagine him perfectly. I felt his struggles and his fear when speaking with the Shadow.  I also liked how Rose used real events in Hugo's life to bring this part alive.

With respect to the Celtic family, we don't spend a lot of time with them, however the time that is spent is loving and then completely tragic.  Again, Rose's writing enabled me to empathize with her characters.

Seduction weaves three different story lines together seamlessly.  Each one is a page turner in its own right.  I never felt confused or lost and if anything, I couldn't wait to find out how each one resolved or was related to the other.  Speaking of, it's only after I finished the book  and was thinking of how to write this review, that I realized, there is one character that influenced everything and has been since since the dawn of time, the Shadow of the Sepulcher.  Creepy!  And yes, this book spooked me a bit, which many books don't.

Bottom line, I thoroughly enjoyed this book and couldn't read it fast enough.  I know the term "I loved it!" doesn't really do it justice, but seriously, I loved it!  It is because of all of these things I am placing Seduction on my Best of the Year list: 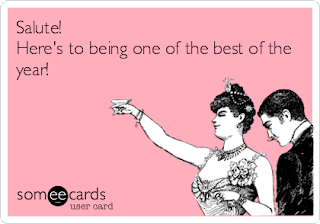 For more information about the author, please visit her website.

To see what others thought, please visit the tour page for other bloggers who have read and reviewed this book http://hfvirtualbooktours.com/seductionvirtualtour/