Hello friends!  Yes it's me Jenny, come by to say hello and announce some changes.  The changes are motivated in part by things running through my head prior to my extended sabbatical and my life for the past year.

Prior to switching positions at work, I had been thinking about revamping, or reinventing my blog.  I've changed a lot, my reading habits, and things I write about.  I was starting to feel cramped, boxed in by being a book blog, reviewing new books, posting at least once a week, regardless of whether I had things to say; ensuring my reviews were up to snuff.  Blogging and maintenance were becoming a chore, and I had been thinking of how to clean the slate.  Then my job switch happened and it forced the issue.

I took a new position at work which involves intense education of new employees and shepherding them into their new careers.  With my first group I filled the roles of manager, teacher, mentor, friend and mom.  The average age of this group is 23.  Yikes!  The stories I could tell....but I enjoy it.  Now I have a second group in addition to the first with it's own set of roles to be filled.  My job leaves  me very little time during the day to pop on blogger and see whats going on.  When I come home at night I am tired, but satisfied and fulfilled, something I haven't felt in a long time at my old job.

Which brings me to my changes. I am starting a new blog, This, That, and the Other Thing.  I created it and that's as far as I got.  I'm keeping it very simple and sweet.  I will post about whatever comes into my head, be it books, my never ending saga of fitness and weight loss (ha-ha), knitting, or general life stuff.

I would love it if you followed me over there, but if you are not so inclined, I understand.  No worries my friends!  Hope to see you over and if not, I'm sure our paths will cross again!

Haven't done this in a while, so I'm stealing from Trish and dipping a toe back into the blogging water.  Warning:  Do not have high expectations!

Listening to: nothing. Can't do audio books,and I am behind on my pod casts.  So that's leave me with radio, which I listen to at work all day.  Either jazz, or stations I created on Pandora.

Eating: hubby just made home made cheese steaks for dinner and they were mm-mm good!

Watching:  Almost Human (really like it), The Blacklist (LOVE IT), Banshee (Thoroughly enjoy), Ripper Street, Arrow, Justified, and I think that's it. Oh wait, Brooklyn 99 and The Crazy Ones.  I gave up on the Walking Dead.  Darwin needs to visit Georgia.

Reading:  To Say Nothing of The Dog by Connie Willis.  Just started and very interesting.  Just finished book 2 in Kim Harrison's series , The Good, the Bad, and the Undead.  This sereis features a witch, vampire and pixie.  LOVE this series and always brings me back to center.

Making: knitting a hat, a shawl, and a baby bunny for coworker.

Planning:  renovations in the house, and hiring more employees at work for training program.  Eek!

Feeling:  good!  Had a few days off, went away with the hubby, and feeling good about life and my plans for the future.

Loving: my cuddly puppy.  And my new eyebrows.  I recently got them threaded and oh my, why haven't I done this sooner!

Wanting: an assistant at work, to be honest.  But I'll take some clear hotheadedness and calming thoughts in the meantime.  I'm never getting an assistant.  I also want the ability to work out more.  Or at least walk everyday for a half hour.  Must make time for that for sure!

Thinking: nothing much at all.

Looking forward to: SPRING!!!!!  Way too much snow, cold, and wind this winter.  i want spring dammit :)

Look, I make no promises on future blogging.  I will post this weekend about where the hell I've been lately.  It's all good, just work related.

So, what have you been up to lately?
Would love to hear what YOU are listening to, eating, watching, reading, making, planning, feeling, loving, wanting, thinking, and looking forward to. 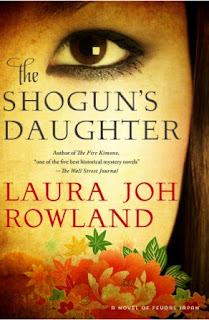 From the Tour's Home Page:

Japan, 1704. In an elegant mansion a young woman named Tsuruhime lies on her deathbed, attended by her nurse. Smallpox pustules cover her face. Incense burns, to banish the evil spirits of disease. After Tsuruhime takes her last breath, the old woman watching from the doorway says, “Who’s going to tell the Shogun his daughter is dead?”
The death of the Shogun’s daughter has immediate consequences on his regime. There will be no grandchild to leave the kingdom. Faced with his own mortality and beset by troubles caused by the recent earthquake, he names as his heir Yoshisato, the seventeen-year-old son he only recently discovered was his. Until five months ago, Yoshisato was raised as the illegitimate son of Yanagisawa, the shogun’s favorite advisor. Yanagisawa is also the longtime enemy of Sano Ichiro.
Sano doubts that Yoshisato is really the Shogun’s son, believing it’s more likely a power-play by Yanagisawa. When Sano learns that Tsuruhime’s death may have been a murder, he sets off on a dangerous investigation that leads to more death and destruction as he struggles to keep his pregnant wife, Reiko, and his son safe. Instead, he and his family become the accused. And this time, they may not survive the day.
My Thoughts:

The setting for The Shogun's Daughter is an unusual one to me, ancient Japan in the time of Shogun rule.  I don't know much about the Shogun but I know Samurai were prevalent and lived by a code of honor and ritual.  The time frame, cultural aspects and a murder mystery are what drew me to this book.

This story contains several interesting threads outside of the murder mystery: Sano's search for the truth which can not help but be wrapped up and twisted within all of the court intrigue, Sano's son and his journey to be just like his Dad,  and Hirata, a friend of Sano who is having difficulties of his own, very mystical and spiritual difficulties.  While I enjoyed reading how these events evolved and were connected to each other, I never felt any real connection to the characters.  I never felt as though I really got to know them and therefore I had no real investment in any of them.

This book is the 17th in Rowland's series featuring Sano, and this may be why.  Most of the character development and connections have probably occurred much earlier in the series.  I likened it to picking up a TV show out of the blue and not being able to make sense of the looks between characters or being able to pick up those inside jokes.  As you probably know, like'em or hate'em, I need to have a connection with characters in books, or else I am not as interested in the overall story.  This is why this book was not as compelling for me as others have been.

Overall the writing and details of ancient 1700's Japan were enjoyable and have pushed me to search out other stories set during this time period.  As far as pace with the story, I think Rowland did a good job with that as well.  It wasn't long and drawn out, and the pages did go by quickly.

Be sure to visit the other tour stops to see what others thought, because I am sure others enjoyed this one more than me.  That being said, I do plan to get the first book in this series and see how it all began.  Sano seems like a good guy, and I'm sure his origins story is pretty interesting.