I don't keep very good records of my reading, even though I have the best intentions every year.    So this 2012 in review post is not so much about books, or how many pages I read, but thoughts on what I consider a pretty good year for me.


I know some of these seem silly, or may not be lessons to you, but for me, this past year made me clarify things about my self, and my world.  I feel like I'm really getting to know myself or who I should be.  Oh my gods I think I am maturing people!

Email ThisBlogThis!Share to TwitterShare to FacebookShare to Pinterest
Labels: personal

Wishing you a very Merry Christmas!

Hope you enjoy your day doing whatever it is that makes you happy :)

Email ThisBlogThis!Share to TwitterShare to FacebookShare to Pinterest
Labels: holiday 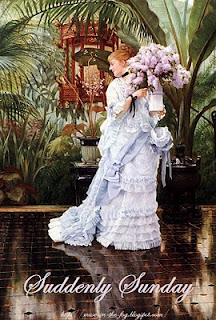 No way! Yes way!  500 posts...who would have thought?  Certainly not me.  Seems kind of fitting since my 4th Blogiversary was December 3rd.  So much has changed in 4 years, but for the better.  My reading goals, blogging, and thinking have evolved, and definitely for the better.  Enough of that though.  I'll reminisce when the blog hits 5 years.  For now, it's woo-hoo and let's carry on!

Hopefully you are all prepared for the upcoming Christmas day extravaganza, whatever that may be. For me, it's Christmas dinner with my parents coming to my place to feast.  That's it.  We have been keeping it super simple the past few years.  I didn't even decorate this year, because life has been so hectic.  I did make Christmas cookies last weekend, but made less than usual.  We don't need those evil little suckers hanging around forever.  Even though they are freaking tasty!

On the reading front, I am thisclose to finishing Bleak House.  It got a little slow there for a while, but I pushed through.  I am also reading The Midwife's Tale by Sam Thomas and boy is it a page turner.  Takes place in 1644 and I haven't read something from that time period in a long time.  I am enjoying the historical setting of the story, and Lady Hodgson is a delightful character, ahead of her time for sure.

On the knitting front, still knitting away on various projects.  Lately, I have been working through lunch at work, and then been too tired at night to knit, so not much progress.  Close to finishing a sweater for Kona, and since the weather has turned down right frigid, baby will appreciate it.

That's about it for me.  Life is speeding by, books are being read, yarn is being knitted, and blogs are getting visited, finally!


What has been going on in your neck of the woods lately?  Any good books lately?

Take care and enjoy your Sunday everyone :)

The lovely Trish from Love, Laughter, and a Touch of Insanity, has been hosting this Pin-It and Do-It challenge for I think most of the year.  I haven't participated until now, because I did not want to get sucked into the vortex that is Pinterst.  However, I could not resist Trish and her cute little button for December's round of the challenge.

Pinterest can be a time suck, but there are many ideas to draw inspiration from as well as beautiful pictures to view.  I don't visit too often, but when I do I always find something to pin.

I chose the Timid Pinner level which is 1-3 pins.  I Pinned and Did two items.

First up is Crispy Edamame

Trader Joe's usually sells frozen shelled edamame but they didn't have any when I went.  So I bought frozen edamame, let it defrost a bit, and then shelled them. 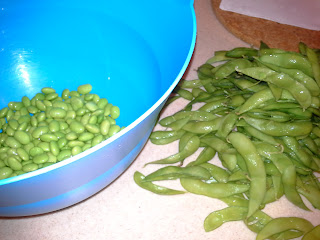 That was a pain in the butt.

Followed the directions for roasting, and here they are: 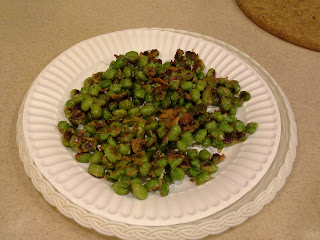 They did not come out as crispy as I thought they would, but maybe because they were not frozen.  Edamame is very filling, so I only ate a little at a time.  Brought the remainder to work and ate them cold.  They were tasty to me.  I will definitely make this again.  My Pin.  Original Pin.

Very easy to make.  Used two bags of fresh spinach but you could easily used chopped frozen spinach and let it defrost. Followed the recipe but would omit the salt next time.  A bit too salty for me.
They are delicious and I will make these again too!  Great for adding a veggie to your lunch at work\, and calorie conscious too.  My Pin.  Original Pin 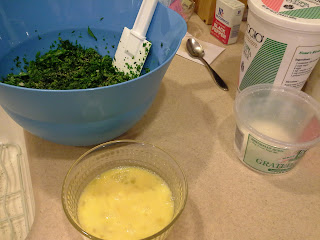 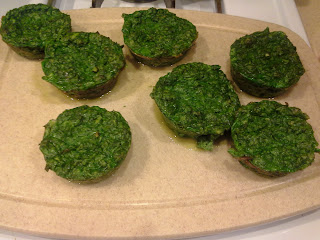 And that's my post for the Pin-It and Do-It Challenge.  I had fun and I just may do it again.  Two pins per month is doable :)

Email ThisBlogThis!Share to TwitterShare to FacebookShare to Pinterest
Labels: Pin-It and Do-It 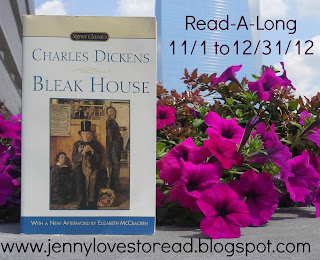 That is a wordy title, but that is what this post is all about.  Checking in to see where everyone is with this classic tome.  There have been conversations and musing happening on Twitter too, so feel free to pop in there as well #bleakalong.  We've also had a song written about Bleak House by Jill of Fizzy Thoughts.  The women is crafty is all I can say.  And she makes me laugh, which is always a good thing.

With respect to other readalongers, how far along are you?  I know some were doing both the audio and the written version.  Some readers were having difficulties due to the characters out the wazoo to keep track of.  Still others are continuing along doing both, because it helps them.

As for me, I am cruising right along.  I'm up to Chapter 42 - In Mr. Tulkinghorn's Chamber or page 589 of 881.  However, I'm getting a bit bleh.  I enjoy Bleak House when I read it, but there's no umph in there for me.  Bleak House is like a nice stroll along a country road, looking at the flowers and such and occasionally saying, "Oh look at that!", but then settling back down to that leisurely stroll.  That's fine, I just feel like I need a little something, something.

So what is Bleak House all about, really?  Well, there is this long drawn out court case called Jarndyce and Jarndyce in Chancery Court.  There are many invested parties, probably too many to count.  People have lived and died, and I think a generation may have passed, and still this suit is not settled.  People have been destroyed both financially and mentally by Jarndyce and Jarndyce.  Interestingly enough Mr. Jarndyce himself is a lovely and generous man, but even he doesn't know which way is up in this suit.  I don't think this case will ever be settled.

This case is the backdrop for Dickens' cast of characters, each of which demonstrates what is wrong with British society at this time.  People interested in far away causes, while their children  go hungry and dirty.  The whole court system and it's community of lawyers, clerks, and bullshit that goes along with court cases, all the while not even caring that the case will never be settled.  The law system accepts the ineptitude that is Chancery Court, and this is appalling.

The characters themselves are numerous, and every one is connected in some form or fashion with J and J, either directly or indirectly.  The most prominent of characters is Esther, and by extension Ada and Richard.  Esther has a guardian angel in Mr. Jarndyce, and was brought to London to be Ada's companion.  Ada is in the story certainly, but I'm pretty far along, and she's not that important.  Esther is.  Through Esther, we meet other characters and learn how tough life can be for women during this time, and how unscrupulous and powerful family lawyers can be.  Oh Esther!  Are you supposed to be the only bright shiny thing in this story?  The only good that comes out of everything?  Esther is so kind, always knows what to say, how to counsel others, she truly is a saint.  Yes, this is a bit snarky, but really the girl does no wrong.  The more I think back on her, the more I realize that she is the only unaffected person in the J and J suit, and that she is nearly perfect in all ways.  Ok enough of her.

Here are some random thoughts about other characters and events thus far, but no spoilers.  (btw, did Dickens have a chart or graph with all of these characters as he wrote this book?  Just saying that's a lot to keep track of, so it speaks to his literary genius I guess.)


Other thoughts that are spoilery so highlight to read:

I'm thinking Esther had either smallpox or chicken pox, since her face was scarred afterwards, and her eyesight left her for a time.  That can happen with chicken pox cases that occur in adults.  Did it even exist back then?

Oooh!  Esther is Lady Dedlock's child.  As much as I was like HA! hope this brings you down, once I read the circumstances, I felt bad for the Lady.  She thought her baby died, and then to find out and miss all that time with her, that was just sad.  And they still can't have time together.  As for Tulkinghorn's finding out, don't get me started.  He's such an asshole, because he acts like he is protecting his client, but he likes to see the Lady squirm.  I think he holds his clients in contempt, and likes to torture them when he can.

I think this post is long enough, don't you?  Overall, I like all the little side stories and things that occur  it's just quite a long book!

So, how are you doing with Bleak House?  Like it so far?  Don't?  Want out of the readalong?  The choice is yours and I won't be mad.  We'll still be friends :)