Review: A Circle of Souls 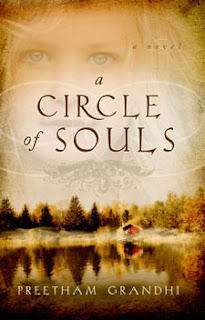 From A Circle of Souls.com:

The sleepy town of Newbury, Connecticut, is shocked when a little girl is found brutally murdered. The town’s top detective, perplexed by a complete lack of leads, calls in FBI agent Leia Bines, an expert in cases involving children.

Meanwhile, Dr. Peter Gram, a psychiatrist at Newbury’s hospital, searches desperately for the cause of seven-year-old Naya Hastings’s devastating nightmares. Afraid that she might hurt herself in the midst of a torturous episode, Naya’s parents have turned to the bright young doctor as their only hope.

The situations confronting Leia and Peter converge when Naya begins drawing chilling images of murder after being bombarded by the disturbing images in her dreams. Amazingly, her sketches are the only clues to the crime that has panicked Newbury residents. Against her better judgment, Leia explores the clues in Naya’s crude drawings, only to set off an alarming chain of events.

In this stunning psychological thriller, innocence gives way to evil, and trust lies forgotten in a web of deceit, fear, and murder.

This was an excellent relatively, fast paced story. Naya the little girl in the story is a sweetheart, and one of the nicest girls you will meet. She is young and doesn't understand what is happening to her. All Naya knows is that she must help Janet, the girl who visits her in her dreams. Dr. Peter Gram is Naya's champion and unbeknown to them, their destinies are linked.

Janet's champion is FBI agent Leia Bines. Leia must find Janet's killer before someone else meets the same gruesome fate. And that fate is gruesome people.

Both situations are part of a larger whole (oh! I just figured out the circle part. Think circle of life.), and even though the reader knows they are connected, it is still a suspenseful read. Each chapter is pretty short and to the point, but it leaves you wanting more. It was hard to put the book down. Even though I did figure out pretty early who the culprit was, the story was still a thrilling read. There's little bit if action thrown in at the end as well.

Each character is likable, and I even empathized with the killer. Yes, the killer too. I am not condoning the actions, but mental abuse leaves scars that no one ever sees. It can guide one's future behavior for better or worse. I'm just saying that you would be messed up too if you lived through the killer's past. No wonder there are so many senseless things that happen to people today.

I also picked up on some ritualism in the book, with respect to how rituals can help us deal with our emotions. When bad things happen, we return to routines or rituals to get us through. How we cope with disappointment and betrayal is important, and we need to have healthy ways of dealing with these issues. There is always a brighter side to life, even on the cloudiest of days.

The author is a psychiatrist and I like how he incorporated his residency and training into the novel. I work in health care and am a geek so I love that sort of thing. The manner in which Peter works with Naya is refreshing because I think psychiatry sometimes gets a bad rap. He really cared for Naya and wanted to do everything in his power to help her.

I do wish more of Naya's Indian heritage was included in the story, but that's just me. I liked that piece of the story quite a bit.

All in all it was an excellent story and I would definitely read another one of Grandhi's books.

Thankss to Preetham for sending me a copy of his book.

This is a book I'd really like to read.

I have an award for you on my blog.

So funny but I apologize, I ALSO have left you an award on MY blog..

And as far as this book goes, I have loved this cover. And I am glad you enjoyed it, it will be one I hope to get to at a later date.

I have this one to read and review sometime....loved your thoughts on it for sure and the fact that you gave it a 90 makes me feel that this will be an enjoyable read for me!

Loved your review, I wanted to read this after seeing another wonderful review only a couple of days ago. Thanks so much for sharing Jenny!

LOL there's some more blog love waiting for you at my place :-)

I really liked this one too, although I didn't find myself really empathizing with the killer. Not sure what that says about me (or you ;))
Thought it was a great first novel.

Well, I will hold off on my blog love for the time being.

I've heard of this book! It sounds pretty good!

Nice review. Based on your comments and others, I think I might enjoy this one. Thanks.

I'm glad you enjoyed this one! I've got it to review and haven't had a chance to get to it yet.

Oh, I would really love to read this book; I've heard a lot of great things about it.