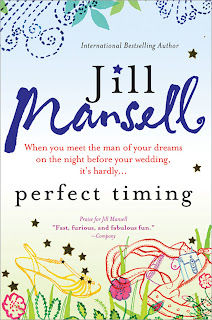 In Perfect Timing, straight laced Poppy Dunbar had always been content with doing things they way they’re supposed to be done, which included marrying predictable Rob McBride… Until she met Tom Kennedy the night before her wedding! Could she really be falling in love with a stranger?

Unable to forget Tom or go through with the wedding, Poppy dashes to London and sparks a chain of events that completely changes her life. Poppy’s new life is filled with colorful friends and adventures. As misunderstandings, family secrets, and jealous quarrels ensue, can Poppy stop running long enough to figure out what’s—or rather who’s—in her heart before it’s too late?

This book is much more than Poppy and her story. The characters are all super likable and their individual faults only endear them to the reader. The main characters are:

Claudia, the jaded and cynical woman who is just trying to find herself a good man, preferably rich.

And last but not least, Poppy, the vibrant, honest, sweet kid (she's 22) who falls into great situations and has some crazy things happen to her. Poppy hasn't been kicked around by life yet, and even if she were, I think she would still see something good in it. That is what makes her so endearing. The promise that her life holds and her joie de vive. Poppy does mature a wee bit throughout the story, and I'm very glad she saw the light before it was too late.

Each one of these characters eventually recognize their shortcomings and correct them to find happiness. But their journey getting there was hilarious and fun. I felt like I was watching a show on BBC America. Mansell is British so she writes with British colloquialism. I enjoy that because it puts you right in the story.
(I think subconsciously I wished I lived in London.)

The chapters read quickly and I was sorry to see this story end. I believe Mansell is classified as chick-lit, but to me it was more romantic comedy. I don't read American chick-lit stories because I have trouble identifying or connecting with the characters, but with Mansell's book this was not the case. I really liked everybody in the book, even Claudia's mom.

Overall this was a great read and I would definitely read another of Mansell's books.

Thanks to Danielle from Source Books for my review copy.

Did try a Mansell once but didn't really get into it.

Hm wish Poppy could be older

B: I was surprised by how much I liked this one. This is not my typical read. I'm pretty sure she was 22, maybe I got that wrong??? Wouldn't be the first time.
I agree Poppy is a bit young, but I ignored that.

I like your reviews they’re always thoughtful and unbiased. 'I don't read American chick-lit stories because I have trouble identifying or connecting with the characters,' you and I share this in common only I'm always trying to find the one that will win me over and from your review I think this minght be the one.
You have a great weekend.

I'm glad to see this lives up to the rest of Mansell's books - they're so much fun!

I've not read Mansell, but I've added this one to my list. Fun review.

My library does not have one of her books!! I may just have to break down and buy one!! This one sounds delightful and knowing that you gave it such a high score makes me lean more towards this one!

I haven't read Jill Mansell yet but from everyone I hear she's great. This one sounds awesome as well. I may have to give one of hers a try.

Romantic: Thank you! I strive to be thoughtful, unbiased, and even handed in my reviews. I tend not to follow the pack, when it comes to, many things. I guess that's why American chick-lit is not for me. If I was single, I'm pretty sure I wouldn't act the way most of those women do.

Stacybuckeye & Dar: You must try one. You won't be disappointed.