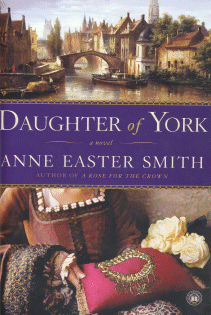 Daughter of York re-visits many of the characters from "A Rose for the Crown," as we follow Margaret, sister of Edward IV and Richard III, from the court of England where, as a pawn in Edward's political schemes, she is kept single until she is 22, when a Burgundian alliance is forged through her marriage to Charles the Bold, the new Duke of Burgundy.


Despite fulfilling her duty to her new country with intelligence and aplomb, Margaret never forgets she is an English princess and a daughter of the House of York. Her homesickness is exacerbated by having to leave behind the love of her life. Fate brings them together rarely after she becomes duchess to a man she only met a week before her marriage, and whom she discovers suffers from such a grandiose view of his place in history that he is capable of great cruelty towards anyone who stands in his way. He also prefers spending time on a battlefield than at home with his wife. She finds solace in the bond she forges with her new young stepdaughter, her friendship with William Caxton, learning to rule her new country, and her unusual confidante, a dwarf named Fortunata. But once in a while, she breaks the rules in the arms of her one true love...

This book covers a 20 year span in Margaret York's life. From Christmas 1461, a few months before the crowning of Edward IV, to 1480, three years after the death of Charles of Burgundy. All of the trials and tribulations of the York family are seen through Margaret's eyes. To her, family is everything and she loves her mother and especially her brothers very deeply. Margaret is proud to be a York. Being the King's sister makes Margaret a pawn, thus arranging the most advantageous marriage possible takes about six years. Margaret finally marries Charles the Bold when she is 23, but they have no children.

Margaret was very unhappy to leave to leave England. However through this marriage she comes into her own. Burgundy is a rich and powerful court, so Margaret's courtly training pays off. Although she is away from family and her beloved England, Margaret stays abreast of all her family's doings, and even convinces her husand to offer shelter to Edward IV while her other brother George, Duke of Clarence, helped to lead a rebellion.

Margaret is a likeable character. Her anxiousness to be married and settled, and her love for her family is palpable to the reader. Unfortunately, the plot of this book was way too s-l-o-w for me. I lost interest and skimmed quite a few chapters.

There were two aspects of the book whihc I did like. One, the portrayal of Margaret and her mother, Proud Cis as normal, likable people. My past encounters with the both of them always painted them in a negative light. Cis and Margaret are usually portrayed as evil, mean spirited witches. In Smith's book they are nice, family oriented people. I would not hesitate to sit down with a mug of ale and a trencher with them, no problem.

The second aspect of the book, is that I learned a bit about Richard III, Margaret's younger brother. I know very little about Richard III, and I believe most people have a love/hate opinion about him. In this book, he seems to be the most serious and forthright brother of the York bunch. I would love to read more about him, so if you have any recommendations please let me know.

Smith creates a secret love relationship between Margaret and Lord Anthony Scales. Unfortunately, the author's note at the end of the book left me disappointed upon learning the truth. I guess something had to be created for Maragaret since her real life was appparently pretty boring. Maybe that's why authors like to make her a witch.

As I said previously, I had to slog through this book due to the snail-like plot. The descriptions and secondary characters were richly described. Although, I wasn't crazy about Elizabeth Neville either. Now she just might be a witch.
I have heard good things about Smith's other two books, A Rose for the Crown, and The King's Grace. I think I just picked a dud.

Email ThisBlogThis!Share to TwitterShare to FacebookShare to Pinterest
Labels: historical fiction, War of the Roses

Thanks for the review, Jenny! I was wondering about Anne Easter Smith's books...I was deciding recently if I should read A ROSE FOR THE CROWN, or Sharon Kay Penman's THE SUNNE IN SPLENDOUR, and even though SPLENDOUR is 900+ pages, I went with that one instead because I've heard such great things about it and that it did not stand up to ARFTC. Now I'm glad I did! I really can't deal w. slow plots, especially in historical fiction, which I usually find so exciting and interesting :)

I haven't tried any of the Tudor books yet, but everyone tells me I need to. This is obviously not the one to start with.

Can't really help you with your mystery, hm, no

I'm thinking this isn't the one for me, but I'm not the target reader since I don't think I've ever read a Tudor book.
I wish I could help you with your book title, but I don't know it :(

I better not read this book, I would have been SO disappointed to read the author's note at the end. I love historical fiction but I hate finding out when things aren't true.