Review: King by Right of Blood and Might by Anna L. Walls 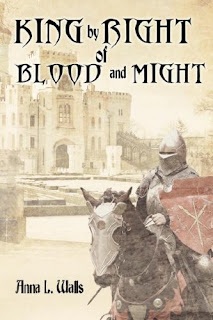 I would like to present you with my first endeavor, a book that I have written titled King by Right of Blood and Might. It is a story about a young prince who must learn how to run a country from sources other than his father. His father, the king, had been a paranoid recluse ever since his own father died and he ran his family accordingly. During that time, the infrastructure of the country collapsed and many of its citizens were enslaved and taken away. Knowing that he couldn’t teach his son the things he wanted and needed to know, King Aidyn sent his son to foster with the neighboring king to the south.

After my young hero learned the things he needed to learn, he had to assemble an army and return home to reclaim and rebuild his own country. His unique friendships afforded him an unprecedented opportunity to do that. All that remained to be seen is if he can hold it all together long enough to achieve his goals.

During this time, we watch his mother descend into insanity and his love for his betrothed grow. We also learn more about how things in the country reached this state and more about his family.

A major catastrophe has occurred on Earth and only about 20% of the population survives the initial event. The aftereffects are devastating and climactic events follow, further decimating the surviving population. It isn't until over a million years pass by that the Earth has heals itself and humankind is able to live and survive. That's where this story begins. The prologue covers all of this.

Harris Penn is the son of the inept and shut-in King Aidyn of Pennland. Harris is sent to Carolinas to be fostered by that King. While there Harris learns how a real King should act and run his kingdom. Harris matures quickly and becomes quite knowledgeable, which is good since events cause him to have to raise an army to travel back and save his kingdom and people from evil doers.

The majority of the story is Harris' journey home and the relationships he makes with allies along the way. Harris respects the different people and their cultures and demonstrates his leadership potential. He is a very likable King and becomes well respected. Harris gives everyone a chance to join his cause since he is forthright and honest, but in the end he takes care of business, ridding the land of riff raff.

Overall this story has very good bones but I did have a few issues with the book. The reader sees the progression and growth of Harris, but he seems a little bland or wooden. It doesn't make him unlikeable. I just don't "feel" for him as much as everyone else in the book. I loved all of the secondary characters, even the bad guys.

There is a spiritual or religious element in the book called the Mother, which I interpreted to mean the Great Mother, like Mother Earth or the Goddess. I have no problem with that, but this religion is never explained. The significance or reasons for the Mother's actions (she makes several appearances) are never laid out. So I felt a little in the dark in that respect.

What I really liked was the set-up of the story and the story itself. Walls has some really great ideas, and I could definitely see a sequel or continuation. This story takes place on the East Coast of the United States and Walls uses the names of states for the names of her countrys, Pennland and Carolinas. The districts in Harris' country also have names that hearken back to before the "Big One".

All in all this is a pretty good story. Walls writing could use some tightening up, some of the dialogue was a bit off or something, but not so much that it was hard to read. For her first self-published book, Walls does a pretty good job and hopefully this only the first of many more good books to come.

Thanks to Anna for sending me her book to review. Good luck to you in your future endeavors :)

Sounds pretty decent :)
Different too in a way

Thanks so much for the review. I wish I had known you before I published. Perhaps my writing would have been better. I'm glad you liked the story.

88 is a respectable review number. Very cool that the author left you a comment. What I think would be interesting is if author's gave their books to ordinary readers along with their editor's. Then they may make some changes that we feel would've made the book better. Excellent review!

Thanks Staci - I would have - gladly - however, at the time such a source was not to be had. Those few - very few - my mom and my nephew - didn't give any helpful remarks. FYI: in case anyone is interested - I have 11 more books, most of which are NOT related to this one. I'm still learning this writing craft.

I just reviewed a book self published sent to me by the author and, to me, there is a difference in quality. It's the tightening up that is lacking, no matter how good the actual story is. THis one does sound interesting though. 88 is a high number :)