From GoodReads:
Sick of vampires? So is Meena Harper.

But her boss is making her write about them anyway, even though Meena doesn’t believe in them.

But not even Meena’s precognition can prepare her for what happens when she meets—then makes the mistake of falling in love with—Lucien Antonescu, a modern-day prince with a bit of a dark side . . . a dark side a lot of people, like an ancient society of vampire-hunters, would prefer to see him dead for.

The problem is, he already is dead. Maybe that’s why he’s the first guy Meena’s ever met that she could see herself having a future with. See, while Meena’s always been able to see everyone else’s future, she’s never been able look into her own.

Now might be a good time for Meena to start learning to predict her own future . . .

If she even has one.


1.)Reasons you chose this book 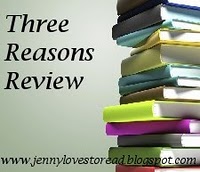 I was offered the follow-up book to review in 2012, so I had to read the first one.  Also, when this book did the rounds on the blogs I listed on my tbr because I liked the sound of the book and the reviews were quite positive.

2.)Reasons you liked or disliked this book

A book about a woman who hates all this vampire crap in mainstream media, and then ends falling in love with one...what's not to love.  Meena was a very good heroine, and I liked her quite a bit, despite not being able to figure out how old she was.  Seems weird that age should matter, but to me it does.  I thought she was hovering around 30, but at times she seemed much younger.  Continuing on, the way in which Cabot incorporated the vampire myths (Stoker's Dracula) seemed realistic to me as well, and added to the story.  These vampires are old school; not shiny and vegetarian.  I liked that a lot!

The overall story arc was also interesting and I probably should have seen some of the twists coming at the end, but I didn't.  I really liked this book and thought it was a page turner.  The book wraps up this tale but it leaves it open for a sequel or series; probably a series.

Now for my dislikes.  Meena has a younger brother named John, and I hated him with every fiber of my being.  What a spoiled, insensitive child (who's in his 20s), who I am not sure really loves or cares about his sister.  Seriously, the things he said and way he acted...I get Meena has no family and tries to hang onto the one family member she has, but come on!  Tell your brother to man up and stop being such a tool.  That aspect bothered me quite a bit.  I've read John isn't too involved in book 2, so I'm happy about that.

Another character I disliked and was puzzled by at the end of this tale was Alaric.  Alaric enters Meena's life to protect her from Lucien.  He is misogynistic, no discernible communication skills, and again a tool.  Yea, yea, he had a crappy childhood, but as time passed he didn't learn any manners?  Anyway, you can tell the author is setting up a love triangle with Lucien/Meena/Alaric, which is fine, however by the end of the book, Alaric has become so besotted with Meena, that it is ridiculous.  I could not figure how this man went from an all about business, butt-hole, to a warm and fuzzy, person in love.   Meena apparently has some cat-nip like quality about her, that we don't know yet.  And it's this quality that attracts vampires and humans alike.  Curious to see how this plays out.

As for the other characters in the story, they were interesting and funny and helped to make the story work.

My last quibble would be that each chapter had a date and time for the events in that chapter.  Basically this whole story took place in like a week or so.  I got that and didn't need th date and time.  It actually confused me quite the timeline at the beginning of each chapter.

I would recommend this book, because despite some of the unevenness throughout, I enjoyed it immensely.  There were times I wanted to stay up late at night to continue reading, but I do have a day job. With so many vampire stories floating around nowadays, it is hard to be completely different, but I think Cabot has done a wonderful job in creating her own piece of vampire love story lore. Insatiable reminds a bit of Buffy the Vampire Slayer with some of its elements, but I'm cool with that.  I think Meena's story has great promise to become much more.