Review: The Lie by Fredrica Wagman 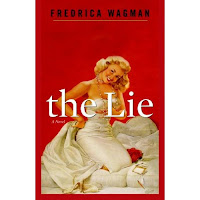 Coming of age in the 1950's America, Ramona Smollens takes her cues about female sexuality from Hollywood movie stars. None is more voluptuous than Rita Hayworth, the redhead who knows how to please a man and becomes a volcano of passion at her lover's touch, whose image inspired American flyers on their missions in World War ll and even graced the first atomic bomb tested at the Bikini Atoll. Ramona marries young to escape her mother's house shortly after the death of her father. She takes with her a dark secret, the sort of secret one simply did not talk about and that would stalk her as she matured into her role as wife and mother, remained a devoted daughter to her own aging mother and secretly harbored an obsession with the iconic Hayworth.

The fictional story Wagman tells of one woman's struggle with the conventions of her day is a bold literary achievement. Underpinning it all is the sad, unspoken truth of the real-life, flesh-and-blood Hayworth, who was sexually abused by her father for most of her growing up. "Men go to bed with Gilda," she used to say, "but wake up with me." During Hayworth's lifetime, the public had no understanding of the depth of meaning and pain behind Hayworth's seemingly self-effacing words. To Ramona, and millions of women like her, Hayworth's on-screen persona seemed the ideal, but was in fact "the lie."

Ramona and Solomon (the man she marries) are two people who have experienced severe major traumas early in their young lives. Solomon found his father murdered and Ramona was sexually abused by her father. Psychological therapy back in the 1950s was not how we know it today, so they were unable to process and work through their resultant mental health issues. Unfortunately Ramona and Solomon are haunted by their pasts for the rest of their lives. But for all the sorrow, doubt, and difficulty they experience, they somehow manage to find each other, albeit somewhat accidentally.

There is a saying, "Every pot has a lid." Ramona and Solomon exemplify this to a T. Things go well for a while but the past is hard to overcome and their life starts to unravel. Ramona begins to fixate on Hayworth and Solomon is ill equipped to deal with Ramona's obsessions and mental health issues. This is an extremely sad tale, but my biggest issue with this book was the way in which it was written. It is one continuous ramble of an unsettled person. For example:

"...For those fleetingly precious moments when the best in both of us came soaring out of all the boredom and suspicion like some exquisite bird in flight...a hawk or an eagle, it was like walking out into the sunshine again after a hospital stay and becoming part once more of that one big beating heart of creation...that one big soul of the whole entire universe that hovers just above the sidewalk as I gazed in infinite gratitude at the whole big autumn afternoon - the trees - the sky - the clouds...happy as I'd walk through Rittenhouse Square filled with a wild sense of joyful freedom because love is freedom..." pg. 95

I understand this is to set the tone of the book and events; put you in the mind of the characters. It was too much for me. It drove me insane.

The cover of this book is what drew me in. I'm shallow and like pretty things. I admit it. So what is up with Rita Hayworth? As mentioned earlier, Hayworth was also sexually abused by her father, so I guess it's supposed to be ironic that Ramona gravitates toward her. Wagman does have an interesting essay about her use of Hayworth on her website.

This was a very dark, disturbing, and sad read for me. I accepted this book because it is out of my normal comfort zone. I tried to expand my horizons. Unfortunately for me, this book was not a good idea. It's just not my thing.
Many other people have liked it. Wagman is a very successful writer.
So, I gave this one a shot. Remember, "Every pot has a lid". This lid just didn't fit my pot.

Thank you to FSB Associates for my review copy!