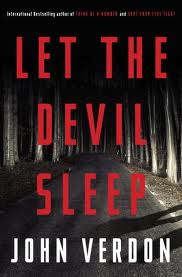 Dave Gurney, the most decorated homicide detective in the history of the NYPD, is still trying to adjust to life in upstate New York when a young woman who is producing a documentary on serial killers asks for his input.  Soon after this conversation, odd events begin occurring in Dave’s life: There is a strange problem with his tractor, a razor-sharp hunting arrow lands in his yard, and he narrowly escapes serious injury in a booby-trapped basement.  As things grow more bizarre, Dave finds himself reexamining the case of “The Good Shepherd”–which, 10 years before, involved a series of roadway shootings and a “Unabomber-like” manifesto expressing rage at society.  The killings ceased, and a cult of analysis grew up around the case with a consensus opinion that no one would dream of challenging–no one, that is, except Dave Gurney.  Mocked even by some who’d  been his allies in previous investigative outings, Dave is only heeded when the reawakened Good Shepherd proves by his actions that his agenda is more complex than previously thought.


I tend to shy away from detective novels because the lead character is usually battling drug or alcohol abuse,  divorced, fired from the job and a generally an unhappy and unlikable person, in my opinion.  Detectives are just not my thing.  However, retired detective Dave Gurney has me second guessing my decision to steer away from detective novels.  Sure,Gurney is a little crabby because he is recovering from almost dying from three gun shot wounds, but I would be too.

While recuperating, a friend asks Gurney a favor.  Could he please keep an eye on her daughter Kim, who is currently working on a television project involving the family members of those murdered by The Good Shepherd.  Who just happens to have never been found.  Gurney agrees because he is a nice guy, and then things start to get hinky.  Events raise Gurney's detective sense, and he starts probing the facts of The Good Shepherd cases, realizing there are many things wrong with the case file.  The story goes off from there and it is one good ride.

Gurney is a likable hero and detective. Watching over Kim and her project turns into the thing that pulls him out of the depression or rut he is in and kinda sorta realizes, but doesn't want to admit.  If you say it out loud it's true, and Gurney will not say it out loud.  The story takes off from here so I won't go into any other specific details.  The way the story unfolded was interesting and there were parts that had my blood pumping.  The suspense was palpable.  I was reading so fast to find out the outcome that I skipped over words.  I love it when books make me do that, even if it means going back to re-read.

I enjoyed almost all of the other characters in the book: Gurney's family, his snarky detective friend Hardwick (who made me chuckle), the murder victim's family members, who all had their little quirks and personalities, the FBI agents.  Everyone was so well drawn and easy to picture, thus adding to the reading of the story.  The only character I wasn't crazy about was Kim, and I think that may have been just me.  I immediately associated that name and character with someone from a TV show I didn't like, and it was hard to shake that dislike.  It could be Kim's age also, because she is in her early twenties thus being naive and not smart.  There is this side issue she is going through that's connected with her project and  she is not smart about it...at all.  Lets just say that if she ended up dead, I wouldn't have been upset.  Too mean?

Lastly, as for the "correct" solving of the The Good Shepherd case, I didn't figure it out at all.  There was a moment early on that I thought might be the key, but no.  Gurney's investigations and thinking are included in the story but not enough for the reader to solve it.  It answer dangles in front of you but it's not until the suspenseful end that all is revealed.  I also want to point out that Let The Devil Sleep is the third book in a series, but totally stand alone reading.  The previous two cases, which I assume are the previous two books are mentioned, but not enough to spoil you from going back and reading them.  Which I think I just may do!

All in all an excellent book that reminded me not all detective novels are the same.