Review: A Partial History of Lost Causes by Jennifer duBois 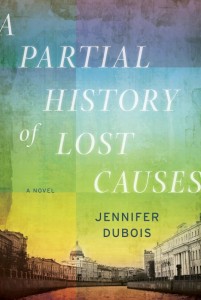 Publisher: Dial Press
Genre: Fiction
Hardcover, 384 pages
Book Source: TLC Book Tours
From the TLC Book Tours Home Page:
In Jennifer duBois’s mesmerizing and exquisitely rendered debut novel, a long-lost letter links two disparate characters, each searching for meaning against seemingly insurmountable odds.
In St. Petersburg, Russia, world chess champion Aleksandr Bezetov begins a quixotic quest. With his renowned Cold War–era tournaments behind him, Aleksandr has turned to politics, launching a dissident presidential campaign against Vladimir Putin. He knows he will not win—and that he is risking his life in the process—but a deeper conviction propels him forward. And in the same way that he cannot abandon his aims, he cannot erase the memory of a mysterious woman he loved in his youth.
In Cambridge, Massachusetts, thirty-year-old English lecturer Irina Ellison is on an improbable quest of her own. Certain she has inherited Huntington’s disease—the same cruel illness that ended her father’s life—she struggles with a sense of purpose. When Irina finds an old, photocopied letter her father had written to the young Aleksandr Bezetov, she makes a fateful decision. Her father had asked the Soviet chess prodigy a profound question—How does one proceed against a lost cause?—but never received an adequate reply. Leaving everything behind, Irina travels to Russia to find Bezetov and get an answer for her father, and for herself.
My Thoughts:
Jennifer DuBois is a magnificent writer, of that I have no doubt.  Her writing paints pictures in the readers mind that are hard to shake.  We read the early history of Aleksandr, growing up in 1980s Communist Russia.  My goodness no wonder why working class Russians are or were so grim and depressed.  The conditions are horrible, and it’s difficult to ever get truly warm, and food was scarce back then.  DuBois  wrote such a vivid description of Russian life, I shivered in my chair from the cold and desperation that permeated her scenes.  In these respects, the settings, ancillary characters, and the general tone of the book, DuBois had my attention.  Unfortunately, when it came to the two main characters, Aleksandr and Irina, I had great difficulty sticking with the story, thus not finishing this book.  I tried with all my heart to continue on this journey with them, but it just didn’t happen for me.
I never connected nor fully liked either Aleksandr or Irina.  Regarding Aleksandr, I just never got a sense of his real essence.  Except for the chess, which was his saving grace, Aleksandr was lonely, introverted, and struggling through life.  He also lost the love of this life, but I had difficulty felling sympathetic towards him.  I know that sounds terrible, but I just didn’t get it.  Even as I write this I’m not sure how to fully describe him.
With respect to Irina, she has been dealt a horrific hand in life.  Her family situation growing up deteriorated quickly due to her father’s illness, so that could make her somewhat maladjusted.  Introverted, with a dark view on life.  I get that.  Then when Irina is given this death sentence, she lashes out like any normal person would do, but the traveling to Russia, didn’t click for me.  You could do anything, go anywhere, and you decide to go to Russia, which although not Communist anymore, is not the best of places to go.  It’s still very tenuous there.  I know I couldn’t possibly ever know how Irina felt, even if I walked a mile in her shoes, but all the same I couldn’t figure her out.  I could not support her decision or her actions, in addition to not having much sympathy or like for her in the first place, probably doomed her character from the start for me and my “special” likes.
So what does this all this mean?  Well I didn’t finish the book, but that doesn’t mean I wouldn’t try another of DuBois’ novels.  Her writing evoked such a strong response from me, that I would be foolish not to give her another chance.  This novel was just not for me, and that’s alright.  That’s why there are a bazillion books in the world.  So please be sure to stop by one of the other tour stops, for a differing opinion of this book.  Rest assured though, if DuBois pens another tale, I will be sure to give her another chance.
For more information about the author, please stop by her website: http://jennifer-dubois.com/
A Partial History of Lost Causes on Amazon.com:
http://www.amazon.com/Partial-History-Lost-Causes-Novel/dp/1400069777/ref=sr_1_1?s=books&ie=UTF8&qid=1325013719&sr=1-1
Jennifer duBois’s TLC Book Tours TOUR STOPS: