Review: The Mysteries of Udolpho by Ann Radcliffe 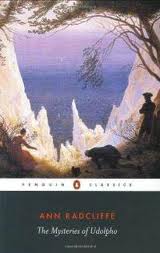 I apologize in advance for the long review but I feel it is the only way to do justice to this book.  The first part will be a bare bones plot summary, from Wikipedia.  It has some spoilers, so skip or skim if you like.  The second part will be thoughts and impressions I had while reading this remarkable literary work.


Emily St. Aubert is the only child of a landed rural family whose fortunes are now in decline. Emily and her father share an especially close bond, due to their shared appreciation for nature. After her mother's death from a serious illness, Emily and her father grow even closer. She accompanies him on a journey from their native Gascony, through the Pyrenees to the Mediterranean coast of Roussillon, over many mountainous landscapes. During the journey, they encounter Valancourt, a handsome man who also feels an almost mystical kinship with the natural world. Emily and Valancourt quickly fall in love.


Emily's father succumbs to a long illness. Emily, now orphaned, is forced by his wishes to live with her aunt, Madame Cheron, who shares none of Emily's interests and shows little affection to her. Her aunt marries Montoni, a dubious nobleman from Italy. He wants his friend Count Morano to become Emily′s husband, and tries to force her to marry him. After discovering that Morano is nearly ruined he brings Emily and his wife to his remote castle of Udolpho. Emily fears to have lost Valancourt forever. Morano searches for Emily and tries to carry off her secretly from Udolpho. Emily refuses to join him because her heart still belongs to Valancourt. Morano′s attempt to escape is discovered by Montoni, who wounds the Count and chases him away.


In the following months Montoni threatens his wife with violence to force her to sign over her properties in Toulouse, which upon her death would otherwise go to Emily. Without resigning her estate Madame Cheron dies of a severe illness caused by her husband′s harshness. Many frightening but coincidental events happen within the castle, but Emily is able to flee from it with the help of her secret admirer Du Pont, who was a prisoner at Udolpho, and the servants Annette and Ludovico. Returning to the estate of her aunt, Emily learns that Valancourt went to Paris and lost his wealth. In the end she takes control of the property and is reunited with Valancourt.

(link to summary)  [Sorry, but my summary was way too long and I tried several times to be concise, but couldn't do it.]

My Thoughts and Impressions:

“…of beauty sleeping in the lap of horror” (pg. 55)
Radcliffe uses this line to describe the mountainous landscape that  Emily and St. Aubert are traveling.  However, this phrase could be used to describe the whole story contained in Udolpho.  Emily, our beauty, often finds herself in the lap of horror: becoming a young orphan, having uncaring and unfeeling family, the treacherous and mean behavior of aunt Madame Cheron, being subjected to the machinations of Montoni, the castle Udolpho and its mysterious occurrences, and the alleged misbehavior of her one true love Valencourt.
When reflected upon as a whole, even though all of these terrible circumstances keep happening, it becomes comical because poor Emily just can’t catch a break!  Most novels have one or two disagreeable instances, but not for Emily.  The entire novel is one bad situation after another; like a soap opera, think General Hospital.  I think it’s this overall arc that led Jane Austen to satirize Udolpho in Northanger Abbey (NA).  Although I haven’t read NA in quite some time, the similarities between NA and Udolpho  are striking and a re-read of NA is definitely in order.  Austen uses situations from Udolpho, such as the mysterious death of a spouse, a rundown castle in search of a good dowry for repairs, for her antics in NA.  It’s all in good natured fun.  By the end of Udolpho, all of the mysterious occurrences are explained, and everything comes together nicely.  One key difference between NA and Udolpho is the heroine.
Emily begins our story being quite weak, crying and fainting at the least little disruption to her person.  Emily is also quite the blusher.  As events unfold however, Emily grows stronger, due in part to what she must endure.  She still tears up and faints from time to time, but at least it is less frequent and the causes of these episodes are legitimate threats to her life and liberty.  I believe Radcliffe was trying to reflect either women’s behavior at her time (1794) or the time of her story, 1584.  Either way, Emily becomes her own person by the end, and it was delightful to see her develop and progress to adulthood.
Throughout Udolpho, there are both little and big mysteries in the story, with most of the action occurring when the story shifts to the castle Udolpho.  I won’t go into detail, but there were many scenes in which I was riveted to the page.  This was probably my favorite part of the book.  Udolpho became quite the page turner and I was not expecting that.  Some may say there is too much going on, however with the novel being so lengthy, the mysteries kept it interesting.
Besides the mystical/horror element, Radcliffe’s descriptions of the various landscapes set the mood for the reader.  This combined with her description of castle Udolpho conjured up feelings of dread within me just like Emily, knowing those thick stone walls held nothing but sadness and despair.  In addition, Radcliffe crafts all of her secondary characters so well, that they assist in pulling the story together, and drawing the reader further into the action of the novel.  All of the characters are quite unforgettable.  The reader will fear and despise Montoni as much as Emily.  As for Madame Cheron, as vile and mean as she can be, Radcliffe was able to bend and sway my feelings into a sympathetic light for Cheron, and that is the work of a skilled writer.  Radcliffe made it easy to escape into this literary feat.
Now you may think I have nothing negative to say, but there were a few things.  First, the time frame of the novel.  This story is supposed to be set in 1584, but it never felt that way to me, possibly because I always assumed Radcliffe wrote in her present time, that being the 1790s.  Another nagging aspect, were the interspersed poems throughout Udolpho.  Some interesting and related to the story, others, not so much.  The poems sometimes enhanced the story, but slowed me down after a while.  Broke my rhythm. Lastly the length of this novel.  When it was originally published, it was done so in several volumes, which help to explain why there are so many mysteries that need solving, and I guess the length as well.  Many have said the beginning is a bit slow, but I was fine with that.  It was the end for me that could not come fast enough.  I felt as though the story meandered a bit, and I was not that interested in the aristocratic characters that entered into the back end of the story.  These characters served a purpose but I felt they were forced or extended their stay too long.


All in all, I really enjoyed The Mysteries of Udolpho, and am so glad I read it and finished it.  Maybe it was Radcliffe's writing prowess, but I believe it has changed my opinion of Gothic Literature as being hard to read and get into.  I would certainly consider reading more of Radcliffe's work.


This novel was read and reviewed as part of the Gothic Lit Tour hosted by Rebecca at the Classics Circuit.  Please stop by there and check out some other fabulous Gothic novels.