Review: The Awakening and Other Short Stories by Kate Chopin 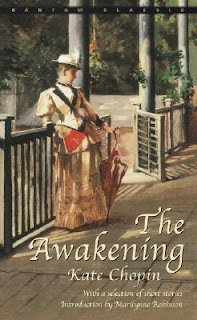 From Amazon.com:Kate Chopin was one of the most individual and adventurous of nineteenth-century American writers, whose fiction explored new and often starting territory. When her most famous story, "The Awakening", was first published in 1899, it stunned readers with its frank portrayal of the inner world of Edna Pontellier, and its daring criticisms of the limits of marriage and motherhood. From her first stories, Chopin was interested in independent characters who challenged convention.

The Awakening shocked turn-of-the-century readers and reviewers with its treatment of sex and suicide. In a departure from literary convention, Kate Chopin failed to condemn her heroine's desire for an affair with the son of a Louisiana resort owner, whom she meets on vacation. The power of sensuality, the delusion of ecstatic love, and the solitude that accompanies the trappings of middle- and upper-class convention are themes of this now-classic novel.

The book was influenced by French writers ranging from Flaubert to Maupassant, and can be seen as a precursor of the impressionistic, mood-driven novels of Virginia Woolf and Djuna Barnes. Variously called "vulgar," "unhealthily introspective," and "morbid," the book was neglected for several decades, not least because it was written by a "regional" woman writer.

Edna married Mr.Pontellier to escape her father, family, and home. Unfortunately several years and two children later, Edna realizes there is no passion or romance in her marriage or her life. There is only convenience and maybe some fondness for her husband and children. She is bored and dissatisfied with her life.

Edna spends her summer vacation falling in passionate love with a young man named Robert. She doesn't realize it immediately, but this affair is everything she has been missing. Her soul, her inner self and feelings are awakened by this love affair. An affair that's not necessarily spoken about, but doesn't need to be, because Edna and Robert know it's there. They also know the complications of this affair could be catastrophic.

Once Edna is back home, she becomes increasingly dissatisfied with her life and her home. When her two boys go off and visit their Grandmother for several weeks, Edna feels at peace. The children's absence is a relief to her. Edna loves her children, but her children do not define her, especially in an era where children and a happy home were supposedly all that a woman needed in her life. And as for Mr. Pontellier, he thinks this is just a phase that Edna is experiencing, and that by leaving her alone it will pass. That could not be further from the truth.

This was a great story. Chopin was a brilliant writer. Her ability to make you sympathize and feel what her characters are going through is remarkable. Chopin also represents her era quite well with respect to the social conventions and mannerisms of the time.

There was one quote in the story which I think represents what the Awakening is about:

"The bird that would soar to see if the level plain of tradition and prejudice must have strong wings. It is a sad spectacle to see the weaklings bruised, exhausted, and fluttering back to earth." pg. 112.

Edna tries to fly in the face of social convention, but unfortunately she is not strong enough. Edna could have dealt with her situation differently, but since she was awakened to her true self, compromise probably would not have worked for her.

My Rating: 95/100 Totally enjoyed it and the other short stories that were also in the collection.

Hi Jenny, thought you'd like to check out another review of "The Awakening". Jemima at The Reading Journey has her review here - she, too, thought it to be an excellent book.

Nice review, sounds like a good book. Though I wonder if the book has a happy ending

I read this in high school and at the time I thought "ugh, how depressing" but I can look back now as an adult and empathize.. I do remember it being well written. I definitely need to pick this up again now and read it.

Michael: Wow! check that out. Thanks I'll go read that now.

B: I didn't want to give away the ending. Do you wnat me to email and tell you?

Jenny: I find that books I read in H.S. I didn't like for the most part. However, once I "matured" I enjoyed them immensely.

Definitely one I need to pick up. Thanks for the review.

Definitely one I need to pick up. Thanks for the review.

I read this in college and was blown away. It's definite an all-time favorite of mine. I really need to read it again. Great review!

I remember reading this back in college and I don't think I fully appreciated it then. Perhaps a reread is in order ... the story is so powerful and still relevant to women today. Great review.

This book looks wonderful. I enjoyed your review.

Great review of a really interesting book. I loved the quote you included and the way you ended your review. It summed it up so well. It is fun to read other people's thoughts on a book I have just recently read.

This is one of my favorite classics, glad you liked it.
http://thebookworm07.blogspot.com/

Carol, StacyB, Jenners, Staci, Naida, Jemima, Sheila: Thanks you all! I had not heard of this author until about two years ago. And as far as my college reading goes...I can't remember so it was probably not all that great :) Go figure.

I haven't read this in years. Thanks for the reminder. I agree with your review 100%