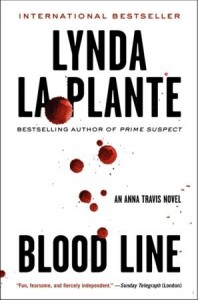 Under the watchful eye of DCS James Langton, DCI Anna Travis takes charge of an investigation for the first time. But is it purely a missing person’s case – or a full blown murder enquiry? An ominous pool of blood and no victim lead Anna on a desperate
hunt for a man who has disappeared without trace.

As Anna becomes obsessed with seemingly irrelevant details, Langton fears that she
is losing control. They still have no body and Anna is under increasing pressure to
make an arrest…

DCI Travis is back to work shortly after the murder of her fiance.  She does this because grief has a strangle hold on her, and work can help her forget about that big hole in her life for just a little while.  Travis also needs to return to work to show her superiors that she was worthy of the new position they gave her.  It's not easy being a female DCI.  Travis is asked to investigate a presumed missing persons case, and she does so begrudgingly.  This case is eight weeks old, mind you, and she is not pleased.

The more Travis tries to turn this missing persons case into a dud, the more things don't add up, leading her to believe the victim is not missing of his own accord.  Someone wanted him missing, possibly murdered.  There are so many questions, and the case becomes multi-faceted with quite a few dead ends.  Just when Travis thinks she has her suspect, something comes along to derail her case.  As infuriating as this case may be, it winds up being the best therapy Travis' emotional wounds.

So here is what I liked and worked well:


So here is what I didn't like:
Overall, I liked DCI Travis and would definitely read another story with her as the lead.  As a matter of fact, a check of  La Plante's back-list shows a few older books with DCI Travis.  Also, La Plante's the author of Prime Suspect, and inspiration for the popular British version, and not so popular U.S. version.  (Not surprised, our TV rating system sucks, and hello, pseudo-reality TV).
Anyway, point being I liked Blood Line enough that I would check out her other works.

For more information about Lynda La Plante, here is a link to her website: http://www.laplanteproductions.com/

And this book is out on a new imprint called Bourbon Street Books.  Visit their Facebook page here.