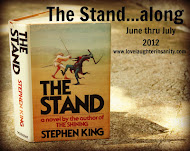 This is my final review post for The Stand...along hosted by Trish at Love, Laughter, and a Touch of Insanity.  Please stop by this post to see what others thought, because seriously, I am sure no one will be as negative as me.  Also, you'll probably get better reviews and thoughts there.
Lets get to it, shall we?

In Short:  The Stand is literally the stand between good and evil when only a handful of people are left in the world due to a catastrophe.  what choices will you make?
Why I read/listened: I was super excited to read The Stand for several reasons.  Always wanted to....one of those books you are just supposed to have read....give King another chance with me.  Also, I figured reading with friends would help me to get through the book, and the read along certainly did that.Thoughts in General: I totally enjoyed the first half of the book.  Didn't want to put it down, was interested in what happened to most of the characters, enjoyed the journey they were taking to get to Mother Abigail.  Then they left Nebraska and headed to Boulder, Colorado, and that's when everything fell apart for me.  Once the Free Zone was started everyone started to bore me to tears.  My knitting sister, with whom I discuss books, asked me how The Stand was going and that's when I realized, I did not like any of these people any more.  The characters became two dimensional, were never going to grow (except for Larry), and I wished they were all dead.  If I lived in the Free Zone, I would have left.  I thought the plot came to a screaching halt and that's why I considered not finishing.  But...I pushed forward and skimmed my way to the end.The book is long. Way too long.  I had the uncut version, but I'm not sure that would have mattered.  Is The Stand scary? Today in 2012, not so much, but back when it was originally published, probably.  Makes you think though what would you do in this type of situation.  Better learn how to ride a motorcycle or at least a Vespa.  And have good walking shoes.  And know how to defend yourself.
Major Spoilers:  As much as I hated
The one quote I marked:  I have nothing for this.  I'm not usually a quote marker so it has to be really good and stand out for me to mark it.Bottom Line: I am glad I finally read this book, and this read-along was the push I needed.  This is a classic good vs evil story and many people enjoy it, just not me.  I was surprised by how much religion was in this story.  Good vs evil, religion should be par for the course, I understand that, but I was surprised by King's religious side.  Captain Tripps was this century's version of the Great Flood, and after everything settled down, mankind started to go back to it's old ways, as discussed at the end of the book, with an armed police force being required, etc.  History always repeats itself people.
btw, Trish said something about taking us two-stepping.  I'm so there.  I even own a pair of cowboy boots so I'm set :)
Serious Bottom Line: Well I wanted almost everyone in the book to die, so there's that.  However, mostly everyone else really enjoyed the book.  Part of me doesn't think the narrative aged well, but since it's good vs evil, how can that be?  Some elements felt dated, like Frannie and her story.  Otherwise, people struggling and trying to come together to survive, that story will never get old.


Have you ever read The Stand?  Thoughts?