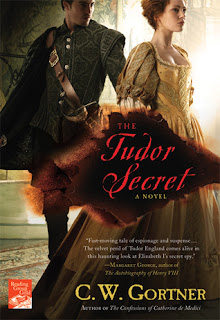 
The era of the Tudors was one of danger, intrigue, conspiracy, and, above all, spies.

Summer 1553: A time of danger and deceit. Brendan Prescott, an orphan, is reared in the household of the powerful Dudley family. Brought to court, Prescott finds himself sent on an illicit mission to the king’s brilliant but enigmatic sister, Princess Elizabeth. But Brendan is soon compelled to work as a double agent by Elizabeth’s protector, William Cecil, who promises in exchange to help him unravel the secret of his own mysterious past.
A dark plot swirls around Elizabeth’s quest to unravel the truth about the ominous disappearance of her seriously ill brother, King Edward VI. With only a bold stable boy and an audacious lady-in-waiting at his side, Brendan plunges into a ruthless gambit of half-truths, lies, and murder. Filled with the intrigue and pageantry of Tudor England, The Tudor Secret is the first book in The Elizabeth I Spymaster Chronicles.


I haven't read many Tudor era books lately because I got a bit burnt out there for a while on all things Tudor.  Same characters, but a slightly different story, this point of view, that point of view, etc.  However, this book has made me love the Tudor era again!  The point of view of a servant at court with a mysterious past sets the tone, and the action or movement of the plot is pretty rapid.  Never a dull moment for sure, and I lost myself in the story at times.


Brendan is sent to court and quickly learns that he must keep his own counsel, choose his side, and know the consequences of that choice.  Brendan is at first loyal to the Dudleys but begins to see their true colors, and it bothers him.  This is not how he was raised.  Soon after his arrival to court, Brandon meets Princess Elizabeth and immediately he knows that she is the one he should be faithful too.  Elizabeth has this thing about her that draws people to her and remain loyal.  There is a reason why this woman was such a force and brought England into a golden age.  It was refreshing to read about a young Elizabeth.  Truth be told Gortner drew her in such a way that I was drawn to her too.


The story covers the time period surrounding the death of King Edward VI, the only son of Henry VIII.  The Dudleys are one busy little family of schemers, and there isn't a court faction they haven't tried to work to their advantage.  I've never liked Robert Dudley and this book gives me the impression my instincts were right. This time period is ripe for a good story and Gortner made an excellent choice by starting his Spymaster Chronicles series with these events.


As for the other characters and plot, I enjoyed everything about them and the book.  The pages flew by and I started to finish the book so quickly, I put it down to save it.  I didn't want the story to end.  I look forward to the next installment of this series, which the author said would be out in Spring of 2013.  I can't wait!


Absolutely!  I liked the intrigue, mystery, and informational chats between the characters.  Even though Brendan is a fictional character, he was interesting and provided a fresh perspective with which to tell Tudor era stories.  Plus he "collaborates" with Cecil the Spymaster, what's not to love?  Cecil was one hell of an asset for Elizabeth!

This book also contains Author's notes, an interview, a timeline, and Reading Group Guide.  Excellent back matter as well.

Would I change anything?