Please give a warm welcome to Donna Russo Morin.  I hope you enjoy reading about the real life places of Inferno, Purgatory, and Paradise.
The Path of THE KING’S AGENT
The King’s Agent is many stories in one, with layers of both the tangible and of the spiritual, cerebral, and emotional. That it is an adventurous quest—a search for an ancient relic—is one of the most concrete facets of this multi-dimensional story.  As a very visual writer, as an imaginative soul, I am fortunate enough to so immerse myself in the places my stories take me that my research becomes the airplane upon which my fancies take flight. This quest—this story—unlike any other I’ve written, took me on a journey I will never forget. I’m thrilled to have this opportunity to give you a glimpse into that journey.
The three major challenges of The King’s Agent take place in locations that resemble and symbolize the three canticles of Dante’s Divine Comedy…Inferno, Purgatory, and Paradise. We begin, of course, in Hell.
Dante Alghieri’s descriptions of his allegorical locations of Hell, Purgatory, and Paradise are considered, to this day, to be among the greatest ever written. So great, in fact, that visual artists, including the great Salvador Dahli, have been inspired by them since their inception. The illustration here shows the specific nature of Hell lying below a mountain top palazzo. 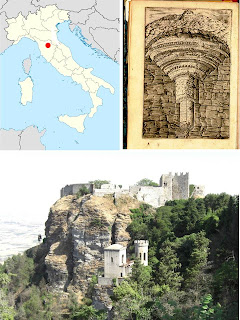 Though obviously fictional as I’ve depicted it, the Palazzo Prato, in actuality a sixteenth century palace, fits not only the geographical location perfectly but also provides the quintessential structural image befitting the worst level of Dante’s Divine Comedy. The Prato area of Italy (see map) is an ancient one, prehistoric in fact, with evidence of life since the Paliolithic times and later colonized by the Etruscans. Today it is a communal city and the Capitol of the Prato Provence. Between Dante’s words and the images found, it was an explosive combustion for my imagination to turn it into the setting for the Inferno.
From the burning depths of Hell, we can but hope to earn our way to Purgatory, and such was the journey of Battista and Aurelia, the protagonists of The King’s Agent, so it is to Purgatory we now go. From the language and imagery of Dante’s Purgatory, I found my mind’s eye picturing an almost infinite cave maze. How astounded I was when I found the Caves of Pastene, in Italian, Grotte di Pastena. 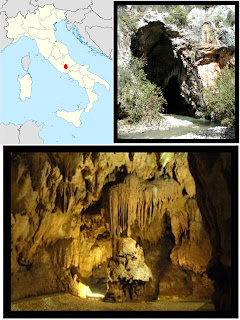 Baron Carlo Franchetti discovered the caves in 1926 within the Ausoni Mountains and people began touring them less than a year later. The area in which they are located is considered one of the most picturesque of Ciociaria, where the inclemency of the geological events led to the formation of atypical landscapes…where bizarre forms of erosion and karst plains related to ancient lakes. The marvels of this underground world include beatific formations of stalactites and stalagmites, columns, lakes, thunderous waterfalls, and draperies of calcite. The room depicted in the picture, The Hall of the Weeping Willow, was especially awe inspiring as well as perfectly constructed to illustrate Dante’s words. The name of this hall was extracted from the center shape of a column vaguely resembling a willow created by a peculiar union of a stalagmite and a stalactite.
For those worthy, for the best of us, the belief contends that Heaven awaits. But there too, Battista and Aurelia found a challenge. Therefore, my task was to find a place of great yet nonetheless imposing beauty. The Dragon Castle was the archetypal location.
The Castello della Dragonara is located on an islet of land in the province of Genoa, in the town of Camoglia. Though it has been the object of much study, even today its exact dates of construction are undetermined. Built into the side of the cliff at the center of the village, the castle was no doubt originally intended as a lookout and was certainly smaller than its current size. 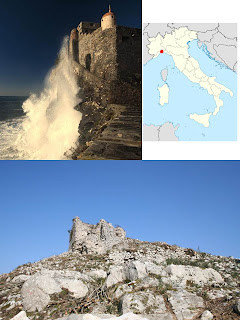 Through the centuries the castle was used for defensive purposes as well and, as far as the validity of the documents allow, appears to have been enlarged and reinforced on numerous occasions. It was attacked on an equal number of instances, the most notable of which were conducted by Gian Galeazzo Visconti, the duke of Milan, and Nicolo Fieschi, both in the 14th centuries. The powerful fortress often served as a place of refuge for the villager during the many pirate attacks. Twice it was destroyed and twice it was rebuilt; always it rose up from the very tip of the shore, from the very edge of the cliff, to rise up to the heavens above it. When not in use as a stronghold, Castello della Dragonara was utilized as a governmental meeting house, not only by the rulers of the town, but by the government of Genoa.
I won’t, of course, reveal how Battista and Aurelia fair on this magnificent journey, that you’ll have to discover for yourself, but I can tell that these three amazing locations are not the only stops on their journey. There is the beauty of Mantua, the magnificence of Florence, and no Italian adventure would be complete without a stop in the glory that is Rome (and with Michelangelo as guide no less).
Yes, this book took me on a greater journey in a sense than any other I’ve written before. I am delighted to have shared some of the highlights with you. Buon viaggio e buono fortuna (safe journey and good luck)!
------------------------------------------------------------------------------------------

Donna thank you very much for your guest post.  I enjoy discovering the real life places that are inspiration or really behind the objects in books.

Donna Russo Morin was born in Providence, Rhode Island in 1958. Her writing endeavors began at age six and covered such timely topics as The Pink Pussy Cat for President and The   Numbers 2 and 4 are in Love.

Traveling through adolescence on the wings of the ‘60s gave Donna a lot of grist for her writing   mill. Feminism, civil rights, the Vietnam War were all a disturbing yet highly motivating muse.   Donna found her voice in fiction and with the appearance of a new horror writer on the book scene, a little known author named Stephen King, she turned her pen to the gruesome and the grotesque.
After graduating from the University of Rhode Island, Donna worked in marketing and advertising for large corporations and small non-profit arts organizations. When she had her children, she knew with a certainty that she needed to show them, by example, that if you believe in yourself, anything is possible.
In addition to writing and teaching writing, Donna has worked as a model and actor since the age of seventeen, when she did her first television commercial for Sears. Since then she has appeared in more than thirty television spots and print ads, everything from changing the oil in her car (that was acting) to modeling fur coats. She also appeared in three episodes of Showtime’s THE BROTHERHOOD, as well as in Martin Scorsese’s THE DEPARTED.
Donna lives peacefully, close to the beautiful shoreline of Rhode Island that she loves so much, with her two sons, Devon and Dylan, her greatest works in progress.
Link to tour schedule:  http://hfvirtualbooktours.blogspot.com/2011/11/donna-russo-morin-on-tour-for-kings.html
Links for author Donna Russo Morin:  WEBSITE | FACEBOOK | TWITTER
Twitter Event Hashtag:  #KingsAgentVirtualBookTour