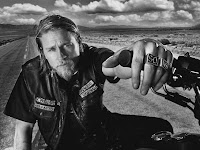 For making me stay up past my bed time to watch the fantastic season 3 opener of the show, and thereby setting the precedent of staying up late every Tuesday night to watch the episode as it airs. I was already peeing my pants in anticipation for the new season, but now I wait hungrily for next week's show and I can see this will happen each week.

Now some of you out there may be saying to yourself, "A show about a bunch of dirty bikers? What the hell is so good about that? And aren't bikers just nothing but trouble anyway, you know with the drugs, hookers, and other assorted illegal stuff? And tattoos...did I mention there are a lot of those too?" Well, yes and no. Looks can be deceiving and the biker image throws a lot of people at first, but when you see past that, and realize this is a show about family, loyalty...taking care of those who mean something to you, and standing up for what you believe in, then you start to discover what Sons of Anarchy are all about.


Yes, the club is an organization which is involved in some illegal activity, however these activities are going to occur whether SAMCRO is involved or not. So they try to make sure it doesn't happen in their part of the world, basically trying to preserve a nice, small town way of life. Unfortunately things don't always turn out that way, but the club makes a good effort. 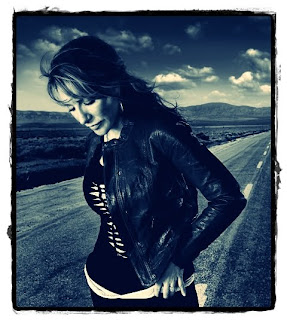 This show explores many facets of human nature and behavior: family dynamics, and the relationships within that family; the power and strength of women both within this group and as women relate to one another; group dynamics and pecking order; rules in the club, both spoken and unspoken. The writing is powerful and the acting just takes it to another level. Emotions are played out before the viewer with such brutal honesty....the actors bare their souls. Kurt Sutter the creator and writer for this show, also did The Shield, so that should tell you right there, that this show does not hold back.
I hesitate to say this show is like the Sopranos, early Sopranos, but in some ways it is. The big differences being that mobsters dress well, drive Lincolns or Cadillacs, and eat very well. Both are organized crime families, plain and simple. However, mobsters have been glamorized over the years and motorcycle clubs have not. You could argue that one is more ruthless than the other, but I disagree. Both do what needs to be done, and lets face it, these illegal activities are not going away any time soon. 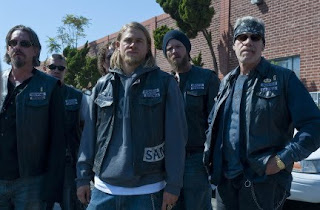 Basically, what I'm saying is that Sons of Anarchy is freaking fantastic show, with brilliant writing and acting, that you probably don't know about. Check it out sometime, because I don't think you will be disappointed. It's better than the Sopranos. There, I said it.

I am an Amazon Associate.
Posted by Jenny Girl at 4:42 PM

Well to be honest, those mobsters sucked at dressing, track suites all the time.

I did watch one ep of this and then gave up...was I too hasty now again

Well Jenny, I asked my son, the one that controls the remote, about this show, and he told me this is not a show for blog ladies. Huh! I think I'll have to wrestle him for the remote. Not to mention "who's he calling a lady?" LOL. I'm o.k. with bikers, tattoos are what turns me off. I obviously missed the first one. I'll be checking this out.

I have SoA on my Netflix queue and I just can't wait for it to get here. I keep hearing how great it it, and I totally want in on the fun.

My boys watch and love this show. I spied it in the Netflix Instant Queue. I may have to check it out, I liked The Shield.

My hubby rode with some of these guys over the weekend!! Seriously, I think this sounds like something we would totally love. Especially because we were both addicted to The Sopranos!

No! I totally forgot that SOA was on last night! No!

My husband got me into this show and I LOVE it. I encourage everyone to watch it. Katey Segal is fantastic - - and the scariest character on the show as far as I'm concerned (meant as a compliment).

Hope FX will re-air the show soon - - or it's available online!

Interesting. I haven't heard of this one.

My girlfriend loves this show. IT sounds good, but I have so many shows I watch already. I have no time for more...lol.
I'm completely in love with MadMen.
http://thebookworm07.blogspot.com/

@Blodeuedd: I would say give it another episode or two

@Irene: I second the blog lady comment. He probably can't picture his mom watching this show. There are some dicey moments from time to time. Tattoos are here and there.

@Trisha: My hubby and I caught up over the summer, so watching 3 episodes at a time really sucked us in. Let me know your thoughts when you get to them.

@Nise: The Shield was excellent. The series finale totally threw me.

@Staci: Definitely check it out.

@Lori: Katey Segal is the scariest on the show. Without her there would be no club. SHe kwwps them all together. She was so robbed of an award. Hope the Golden Globes show her some love.

@Ju-Ju: Give it a few episodes and you'll be hooked.

@Naida: I also watch way too many tv shows, but this is one I really look forward to. I tried several episodes of Mad Men and got a little bored, so I gave up. Maybe next summer.