Review: Island of the Swans by Ciji Ware 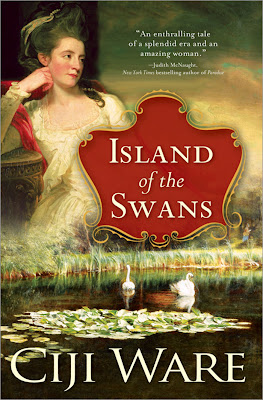 From Sourcebooks:
Re-issued in its original full length, this acclaimed and bestselling romantic historical novel by award-winning author Ciji Ware tells the true story of passionate and flamboyant Jane Maxwell, the 4th Duchess of Gordon (1749-1812). In love since childhood with Thomas Fraser, when she hears that he's been killed in America, she marries the Duke of Gordon with disastrous results. But Fraser, very much alive, returns to England to claim her love.

In addition to telling a heart-wrenching love story, Island of the Swans also paints a fascinating portrait of a powerful land controversial woman and the tumultuous era in which she lived. Patroness of poet Robert Burns, advisor to King George, painted by Sir Joshua Reynolds, Jane Maxwell was a towering figure in her own time and is an unforgettable heroine.

*Thomas Fraser, of the Fraser Highlanders who participated in the '45 with the Young Pretender, and thus lost everything. Thomas has struggled all of his life and must join the army to make a living. He and Jane have loved each other since childhood. (And yes, theses are the same Frasers as those featured in the Outlander Series)

*Alex Gordon, the Duke of Gordon. His family supported the King in the '45 and thus kept all of their land and titles. There are rumors of the Gordon Madness afflicting the bloodline. Although Alex's mother tried to spend his entire fortune, he was able to hold on to some and rebuild. Alex was acquainted with Thomas and Jane during childhood, but he was a Duke, and therefore did not hang out with them.

*Jane Maxwell, a beautiful woman from a lower ranking, somewhat poor, aristocratic family than the Gordans. She longs for family, love and independence, and freely expresses her thoughts and ideas on many subjects. Jane champions the cause of the underdog and struggles to keep Scottish traditions alive. She has been in love with Thomas since childhood, and promised to be wife someday.

Through fate and meddling family, tragedy visits this trio many times throughout their lives, bringing heartache and despair. Jane and Alex come together first as friends and then as lovers. They share the bond of having loved and lost someone close to them. But when Thomas comes back from the dead, happy times are over, and Alex and Jane's life is a constant cycle of happiness, sadness and mistrust. Every time the reader thinks everything will work out, fate brings Thomas back into their lives and reopens old wounds.

Alex is possessive and mistrustful of Jane due to his experiences growing up. Instead of just accepting that Jane will always love Thomas, Alex becomes furious and makes bad decisions, which usually hurt Jane. For her part, Jane always manages to pick herself up again and carry on. However, I do have one problem with Jane. I don't think she ever tries to see the situation form Alex's point of view. She is so consumed by her love for Thomas and how they can't be together, that she doesn't realize the pain she causes Alex. This may be my modern view of the situation, because for Alex's part, he never truly opens himself up to Jane. Men in those days didn't speak about their feelings. Alex already had trust issues, so why would he expose himself to being hurt further? And then there's Thomas, who can't be with the woman he loves, and never finds love again. Nothing compares to his Jenny.

See...very tragic situation all the way around.

The love story of these characters was deftly weaved within the life and times of Scotland in the 1760's and forward. I was completely immersed in this story and left the real world behind. I even uttered "Aye Lassie" to my co worker's questions a few times, which caused us to burst out into some much needed laughter.

There is one scene in the book, when Jane and Alex are out in the Highlands raising an army to fight off the rebellion in the colonies. Alex and Jane are performing ancient Scottish dancing; the description of the dance, and the the undercurrents of the situation and their feelings are written so descriptively and accurately, it was as if I was there. I could see their faces doing that dance.

Jane was also quite a force in her day as well. She was friends with many influential people and had an ongoing rivalry with the Duchess of Devonshire. Jane was also friends with PM Pitt and the poet Robert Burns. Jane's activities throughout the story also bring a richness and realness to this tale.

If you can't tell by now, I thoroughly loved and enjoyed this book. I loved each and every character, despite their faults, and became quite fond of all of them. Although I knew a happy ending could not be had by all, I was riveted to this book and was sorry to see it end.

My Rating: 100/100 I really loved this story. I loved Ciji's writing and look forward to reading the rest of her novels. I am so happy to have discovered this author! It's a shame I never heard of her before.

If you would like your very own copy, please stop by on Tuesday, February 9th for my interview with Ciji and your chance to win 1 of 2 copies of Island of the Swans.

Thank you again to Danielle at Sourcebooks for my review copy.

Great review. I've been seeing this novel mentioned several times in the past week. It sounds wonderful, and believe me, I will be here on Tuesday to enter the giveaway.

Great review! Oh it sounds good, and so sad, a love triangle can't never end happily. But now you got my interest

Great review Jen! I wasn't sure this would be something I like but my likes tend to be a lot like yours so I'll definitely be back to enter your contest. I'm glad you enjoyed it so much!

I am reading this book now and completely agree with you. Such a tragic story, and so well written. Thanks for the review!

I wasn't adding anymore books to my wishlist, but your review has made me change my mind. Why did you have to write such a good review!?!?!

I'm so glad you thoroughly enjoyed the book. I found it to be excellent too:) Your review is wonderful.
Hey- BTW, I absolutely LOVE what you did with your blog!

100! hmmmmmm....I don't see that too often so of course I must read this one this year for sure...loved your thoughts on it!

I am so glad that you enjoyed this one as much as I did!! I really look forward to her other books, and so glad that they are being reissued for new generations!

And I will be back to check out the guest post, Ciji does wonderful ones!

I am going to edit my review to include your link to the review as well.

Ladies: Thank you all so very much!

Ash: You don't know how much I struggled with this review! I wanted to include everything I loved, not spoil anything, and make it sound interesting. So glad you liked it.

Nicole: I think there are many more historical women out there waiting for their stories to be told.

Ms. Lucy: Thank you dear. I think I finally have it the way I want it.

MArie: Thank you for the link. That was so kind of you.

The book sounds great and must be extra special to get 100 out of 100! Great review!

Absolutely loved your beautifully written review and I could tell you got totally carried away in the story. Your "Aye Lassy" slip ups totally cracked me up :-)
Straight on my wishlist it goes and I'll be back for your interview with the talented Ciji Ware!

Love this one and every other one of her books. I look forward to your interview :)