HFVBT Tour Stop and Review: The Chalice by Nancy Bilyeau 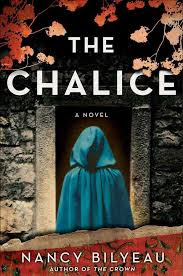 In the next novel from Nancy Bilyeau after her acclaimed debut The Crown, novice Joanna Stafford plunges into an even more dangerous conspiracy as she comes up against some of the most powerful men of her era.

In 1538, England is in the midst of bloody power struggles between crown and cross that threaten to tear the country apart. Joanna Stafford has seen what lies inside the king’s torture rooms and risks imprisonment again, when she is caught up in a shadowy international plot targeting the King. As the power plays turn vicious, Joanna understands she may have to assume her role in a prophecy foretold by three different seers, each more omniscient than the last.

Joanna Stafford lives during one of England’s more turbulent times, during the reign of King Henry VIII, between wives three and four.  The King has dissolved all of the religious houses, thus seizing their goods and enriching his coffers.  Henry is on the precipice of being excommunicated from the Church, and one of most closest advisers is Cromwell.  Really, could it get any worse?  Why yes!  Add to that the Reformation movement and Spain’s Emperor Charles the V becoming friendly with France, and this is the tinder box of politics Joanna finds herself in.

All Joanna wants to do is live a quiet life, raise her nephew, and build a tapestry business.  But no, this is not possible.  Factions at court are vying for control of Joanna because they view her as a means to an end; as a salvation against the dark forces of the King and Reformation.  Why?  Seers have predicted that Joanna is instrumental in helping the Catholic Church.  Without Joanna, Henry wins thus defeating Catholicism and the true heir to the throne, Mary Tudor.  Joanna is afraid of these prophecies, rightly so, and must make a decision: is she in or out with court intrigue and the shaping of the future of England?

Although all of these events are going on, this novel is more about Joanna and the person she is, than about this period in history.  That’s why I enjoyed the novel so much.  Many times with Tudor novels, the story inevitably gets sucked into the actual events with the characters as side pieces or window dressing.  In The Chalice while Joanna is instrumental in events I felt it was her and her hopes, dreams and fears that kept me reading on.  What will Joanna do?  Why is going to London?  How will this event shape Joanna’s views?  Joanna is a great character who is intelligent and a bit spunky.  Not too much mind you, but just enough for the era, and in consideration of the fact the woman was going to be a nun.  Yes, Joanna is an ex-novice.

Besides our heroine, what also kept me flipping the pages was the action.  There is intrigue, shady people, prophecies being told, and characters being whisked away either to the Tower or to back rooms where the chess players of the court try to convince them of why their cause is the right one.  Mary Tudor stops by as well as a very famous seer towards the end of the novel.  (You would know if I gave his name.)  Bilyeau builds a palpable, realistic world for readers, and although The Chalice is the second in a series,  The Crown was the first, I did not feel  lost.  There were mentions of what happens in The Crown, but not enough to make me feel like I couldn't read it and be surprised or drawn in.  I will definitely go back and read The Crown.  The only area that may be lacking from not reading The Crown was Joanna’s relationship with Edmund and a Geoffrey Scoville.  I did not know all of that history, so I accepted what I read in The Chalice at face value.  I probably would have had a deeper reaction to those plot lines in the book if I had read The Crown.

All in all I thoroughly enjoyed The Chalice and thought it was a page turner.  And since Bilyeau has stated she envisions a series of books about Joanna and her adventurous life, I am eagerly awaiting the next in the series.


To see what others thought of The Chalice, please visit the tour page or twitter feed:

Nancy Bilyeau, author of The Crown, is a writer and magazine editor who has worked on the staffs of InStyle, Rolling Stone, Entertainment Weekly, and Good Housekeeping. Her latest position is features editor of Du Jour magazine. A native of the Midwest, she graduated from the University of Michigan. She lives in New York City with her husband and two children.
For more information, please visit Nancy Bilyeau's website.  You can also follow her onFacebook and Twitter.