Review: The Way by Kristen Wolf 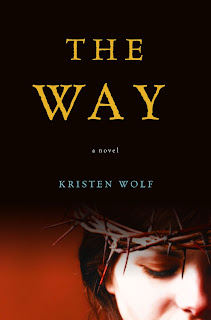 From the Author's website:
Anna is a fiery tomboy living in ancient Palestine whose androgynous appearance provokes ridicule from the people around her and doubt within her own heart. When tragedy strikes her family, and Anna’s father disguising her as a boy sells her to a band of shepherds, she is captured by a mystical and secret society of women hiding in the desert. At first Anna is tempted to escape, but she soon finds that the sisterhood’s teachings and healing abilities, wrapped in an ancient philosophy they call “The Way,” have unleashed an unexpected power within her.
When danger befalls the caves in which the sisters have made their home, Anna embarks on a hazardous mission to preserve the wisdom of her mentors by proclaiming it among ordinary people. Her daring quest and newfound destiny reveal, at last, the full truth of her identity a shocking revelation that will spark as much controversy as it does celebration.
Anna’s story is one of transformation, betrayal, love, loss, deception, and above all, redemption. Readers will cheer for this unforgettable protagonist and for debut novelist Kristen Wolf, whose beautifully written book both provokes and inspires. A compelling mix of history, myth, and fantasy, The Way is a fascinating exploration of the foundations and possibilities of human spirituality.
My Thoughts:

What if Jesus had been a girl?  Forget what you know or believe in for a short time and just accept this statement at face value.  Then think about what the true story of Jesus could have been like.  This is the essence of the Way.

Anna is an androgynous girl that had to dress like a man in order to survive society at that time.  Circumstances see Anna abandoned by her father, and sent to live among the shepherds, as a boy. Eventually Anna embraces her androgyny and becomes Jesus.  Two of the shepherds, Solomon and Judas, suspect Anna's true nature, but remain silent.  Solomon and Judas are followers of the Way, the maternal based religion prevalent in history until Christianity came along.  Followers of the Way do not judge and accept people, things, and life for what it is.,  They give thanks for being alive and exploring what the world has to offer.Anna cannot stay with the shepherds forever, and she eventually comes to live with a group of women who keep the Way alive.  These women live in secret because they are persecuted for their beliefs, and they are women.  Women are not allowed to have any power in this society.  Anna learns about the Way and finally is able to make peace with who she is until events force the women to abandon their secret living place.  Forced out into the world, Anna must again take up her "Jesus" persona and see her two companions to safety.  Dressed as a man, Anna was able to move throughout society with freedom and ease, that a woman could never have, especially a woman with a manish mannish features.  Women of the Way of healers, having  knowledge of herbs and healing and along the way the trio begin to treat or "heal" people.  Jesus eventually begins to preach about the Way, and eventually gets herself in to trouble.  I won't give away the rest.  I think I already gave away too much already.I liked the story for several reasons:
This book may offend some, but I enjoyed it for what it really is: a different way of looking at things and considering the possibilities.  Doesn't make you any less of a person or any less spiritual.  Makes you think.

A link to the book trailer:  http://www.youtube.com/watch?v=PzwaQgMlJKg
Thanks to FSB Associates for my review copy.
© Jenny Girl - 2012 "All Rights Reserved"
Posted by Jenny Girl at 9:58 AM