What follows are my thoughts on the final episode of LOST.  If you haven't seen it, then please don't read this post as there are spoilers.  Plus you should watch it for yourself and get your own impressions. 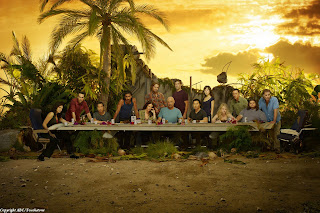 Well, what can I say? I am semi-disappointed however I wasn't expecting too much to begin with.  I realized early on that the side-ways was a bit wonky, because the people in love would meet up and then say "See you there later." Why are they meeting up? Oh don't tell me they are all dead! Well apparently they are! But according to Jack's father, they were waiting for Jack in order to move on together, because they all spent a significant amount of special time together. According to Christian Shepard, everyone in that church was dead, either before or after Jack. Yea, not liking that.  I spend a significant amount of time at work.  Does this mean I may eventually end up with those people in the after life?   Please Lord no.

I do like that everyone found one another.  Jin and Sun, Sayid and Shannon, Sawyer and Juliet were the most special for me.  I liked these characters the most.  As far as the island story line wrapping up, I felt it was too predictable and didn't jive for me.  You drain the life force of the island and Smokey becomes human, thus being able to kill him.  Water into wine, water into blood.  Come on!  I did like the two Star Wars references right off the bat though.  Nice touch.  And Hurley taking over the island, with Ben as his number two.  That made sense.

No, this show didn't wrap-up nicely at all. Lots of unanswered questions and things just cast aside.  For instance, Dharma, how Widmore got there, the Other others: what happened to them?  The Asian guy and the temple: what was up with that?  I'm sure there are other things I could think by why bother.  My point is made.


My main problem is the series itself. The writers keep saying it was a character driven show and blah, blah, blah, and yet that is NOT how this show started out. It was about the island and the sci-fi, mystical stuff going on. Maybe some good vs. evil because of the Others.  But the loves and lives of the characters, religious themes of redemption and sacrifice, they were not prominent.  It was about the crazy crap that happened on the island.  Polar bears showing up, time travel, the island moving!  The show evolved into something totally different than when it started. I understand that shows evolve and change but not that much.  My friend at work seems to think LOST started to change when J.J. Abrams lessened his influence.  That's certainly a plausible theory and would make sense.

So, everyone in the church is dead. Why is Claire with a deceased baby Aaron, if he didn't die? How did Penny die? The side-ways was a purgatory for them to deal with their issues before moving on. Ben
wasn't ready to move on, so he stayed outside. The writers have always maintained the show wasn't about Purgatory but apparently it was.

Most of the stuff I have read not on blogs is mixed.  Some love it, some hate it.  You can't please everyone.  As for myself, I was only watching to see how it all ended because I invested the time. I am not surprised that I'm not totally happy, but I wasn't expecting to be. If that makes sense.

Am I glad I watched it?  I don't know, it's a T.V. show.  Some people say it changed they way they watched T.V.  For me that is not the case.  But I think that's because the way I watch changed years ago with, you guessed it, Buffy the Vampire Slayer.  Now that was a show that was character driven and sci-fi.  Another show was ER, back in the good days, but I digress.

It's over and I have some books to read now :)

For more LOST stuff:
here is a video with tons of unanswered questions from LOST.  I laughed at it.

Come on guys, really??  You didn't make enough money?  I think this says it all.

I am an Amazon Associate.
Posted by Jenny Girl at 7:46 PM

I was pretty disappointed - I had hoped for more answers about some of the "weirdness" . I read somewhere that there might be a movie to follow - not sure if I would go see it though...

Now, I'm glad I never watched the show. I have read that people cried all night after the ending, etc. even thought it was fantasy!

I was disappointed because there was too many unanswered questions. My son called it months ago that they were all dead so I was somewhat prepared.

I agree with you almost point for point. All along they kept saying it wasn't going to be a pergatory sort of thing, but it totally was. I did like seeing the people end up together (I cried with Charlie and Claire), but I hated how that part ended. The end to the island story made sense, kinda, with it ending with Jack closing his eye as it started with him opening it - but I was hoping for more. The ending was not a great as it could have been. They definately abandoned a lot of things that they could have finished off. I was actually very mad with the way it ended, but again, I didn't expect to like it.

Oh, and I loved that video!

Haha that video says it all!
And yes, what?! I have no idea what the ending meant

I had loved this show the first few years when it was on but when they started with all the back and forth, the island shifting and all that crap they totally LOST me and I just didn't have much interest in the show anymore. I did watch the end just to see if anything made more sense but it didn't really.

I wasn't a lover or a hater of the ending. I was probably more disappointed than happy, but I was satisfied. I have a review/recap up if you want to read my too sence. I loved the video and I think he makes some great points.

I always thought it was a character driven show and I cared about the characters more than the rest of the sci-fi stuff. My husband felt the opposite and I think was more disappointed. Answers would have been nice, but I wasn't really all that disappointed in the ending, though a bit sorry that they had to choose the religious way out.

They weren't all dead the whole time, just in the sideways world. The reason they were together in the end was because the island was the most significant and life-changing part of their lives. So that probably wouldn't be your (or my) job. They died in the real world whenever they died - some on the show, some years later - but they all joined together to move on.

Because of you I will check out Season 1 and see what happens!!!

O I totally feel you!
We were pulled in to a mystery.
Sure we got attached to the characters along the way, but it was the mysteries that made it a phenomenon.
I feel like the ending was emotionally satisfying but not plot satisfying.
Overall a great journey with a bad destination.

I was sad to see the show end, but was fairly happy with the last episode. I think its open to interpretation. And one of the things I liked about LOST was the mystery.

I do think the island was their Pugatory.
Great post Jenny! I like that video about the unanswered questions.
http://thebookworm07.blogspot.com/